A ceremony was held at the Lisims Nass Valley RCMP detachment this week to raise the Nisga’a flag.

Detachment commander Sgt. Donovan TAIT and NLG Chairperson of the Council of Elders Shirley Morven raised the Nisga’a Flag on December 19, 2012 to symbolize a strengthening relationship between RCMP staff there and the Nisga’a Nation.

“We (RCMP) have waited a long time for this and again, this is cutting edge stuff for RCMP internally.” said Sgt. Tait in a press release issued this week.  “We are excited and proud to be able to show our respect for the Nation this way.”

After a short blessing, Sigidim-nak’ Angaye’e commended Sgt. TAIT and his staff for their ongoing commitment to fostering an effective and respectful relationship with the Nisga’a Nation, said the release.

Sgt. TAIT and Sigidim-nak‘ Angaye’e then proudly raised the flag together.

This is the second Nass Valley RCMP-led event this year intended to demonstrate commitment to the inclusion and understanding of Nisga’a culture in their policing initiatives.

Earlier this year, a piece of art was unveiled at the detachment in the same spirit. 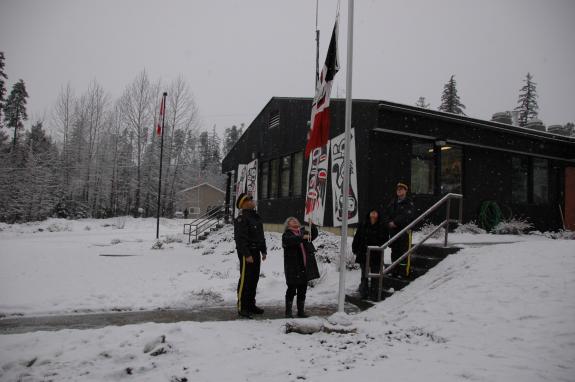 School board pushes back against province

Unofficial holidays: Here’s what people are celebrating for the week of Sept. 20 to 26

Rabbit Day, Hobbit Day and One-Hit Wonder Day are all coming up this week

What is the future of transportation in Terrace?

Over 200 B.C. firefighting personnel will assist in the U.S.

QUIZ: A celebration of apples

September is the start of the apple harvest

Preparations underway for pandemic election in Saskatchewan and maybe B.C.

Administrators in B.C. and around the country are also looking to expand voting by mail during the pandemic

The court’s second female justice, died Friday at her home in Washington